Treating halitosis – The art of scent in dentistry

I think all of us dentists have experienced it at least once in our lives. Our answer to a simple question made by the person in front of you, “So, what do you do for a living?”, triggers their abrupt reaction – smile disappearing in an instant, mouth shutting, lips covering their teeth. This should come as no surprise. The prevalence of people dissatisfied with the appearance and the aesthetics of their teeth is reported in the literature up to 53%, tooth colour and misalignment being the most common factors influencing it. Now imagine the reactions of people who hear me say that the focus of my clinical and research work is halitosis.

Ok, in all honesty, most of the time what I get back is a confused face, so I have to translate it into everyday language first – "I treat bad breath". The discomfort I sometimes witness in my interlocutors upon saying these words can reach almost comical levels. Hands flying up to cover the mouth, heads turning sideways. And this comes as no surprise either.

Us humans have what is called a "social brain". There's an innate, fundamental desire for social belonging and acceptance from our peers, ensured by evolution. Halitosis is one of the elements that can very much be impeding for social relations and interaction, whether it is something as impersonal as talking to a business partner at a close distance or something very intimate like kissing the person you love. Even the market knows it!

The so-called "fear-appeal" is an advertising method that "[presents] a risk of using or not using a specific product, […] such that if you don't "buy", some dire consequence will occur". Simply put, it means using fear to sell products. This is how today's marketing historians and analysts refer to the jackpot campaign, a worldwide known mouthwash brand started in the 1920s. Their ad read: "Halitosis makes you unpopular". The rest is history.

Before coming to the dental office, most of my patients have spent a considerable amount of money, scouring drugstores, pharmacies and online stores searching for the Promised Cure for this dire condition… to no avail.

Diseased liver can make you have bad breath, too.

The symptom of oral malodour (bad breath) can be caused by the conditions in the oral cavity, as much as the ones outside of it. Up to 90% of all halitosis cases have an origin in the oral cavity. This number implies that most halitosis cases fall within the domains of dental professionals' treatment. It is, however, of crucial importance to understand its aetiology to be able to make a correct diagnosis and efficiently treat it accordingly.

Extraoral halitosis accounts for around 10% of all halitosis cases. It can be caused by diseases and conditions of the respiratory (e.g. infections of the ENT region) and gastrointestinal tract (e.g. hiatal hernia, malignant diseases), but may also be bloodborne. Bloodborne halitosis can be a manifestation of severe conditions of the liver, kidneys or maladies, or as recently described, even a genetic mutation.

What our nose recognises as unpleasant scents is a complex blend of different compounds. Volatile sulfur compounds (VSC), molecules produced as a byproduct of the metabolism of oral anaerobic bacteria, are mostly accountable for the foul-smelling breath. Your nose recognises the smell of the three principal VSCs quite well, whether you're aware of it, or not. Methyl mercaptan is the typical smell of the horse stable, hydrogen sulfide is the smell of rotten eggs, and dimethyl sulfide is the compound behind the typical sauerkraut smell. While most researchers in the area of halitosis focus on VSCs, it's essential to keep in mind that other non-sulfur compounds can also cause the unpleasant odour. These are called diamines - putrescine, cadaverine and skatole is what we recognise as the odour of decay, rotten meat and fish, faeces and unwashed feet (yes, you read it correctly!)

All of my appointments with patients making complaints about halitosis start with an extensive and thorough medical, dental and halitosis history. The information I gather steers the diagnosis even before doing a clinical examination. One of the interesting phenomena about halitosis is that the person having it is not even aware of it, irrespective of the malodour's intensity, and according to one study, these are the majority of cases. These patients are very often directed to the dentist by their spouses or family members. There is a physiological explanation behind it, called olfactory fatigue or olfactory adaptation. When exposed to a particular compound for a prolonged time, one loses the ability to distinguish a specific scent, making some of the patients unable to "smell" their halitosis.

These moments of conversation with the patient are not only crucial for the diagnosis of halitosis. They allow us to learn more about their profile, them as humans. They care as much about getting a nametag for their problem, as they want to get rid of it. I've learned about the negative and prolonged effects halitosis can have on the psychological and social wellbeing through a patient of mine. Even months after the halitosis had disappeared following our treatment, he would still very often talk to me with his head and mouth rotated away from me. His behaviour was profoundly changed by the years of shame due to the oral malodour. Precisely, to the point that it had become almost natural for him to avoid speaking directly to the person sitting across from him.

Clinical examination supplements the information gathered through anamnesis, and in the case of intra-oral halitosis allows us to pinpoint the exact cause. As data tells us, tongue coating is the cause of almost 50% of halitosis cases. It is a layer on the surface of the tongue of varying thickness, comprising bacteria, desquamated epithelial cells, leukocytes from periodontal pockets and blood metabolites. To a much lesser extent, it is caused solely by inflammatory periodontal diseases, or a combination of tongue coating and gingivitis/periodontitis (less than 20%). Certain factors can further contribute to halitosis such as poorly maintained hygiene and prosthetic appliances, open cavities or chronically draining abscesses.

"But you don't actually stick your nose in their mouth to smell the breath, right?" is a question I very often get when discussing my daily work. Technically, no. But assessing the intensity of halitosis is of utmost importance to keep track of its dynamics, especially following treatment. So, I'm what is called an "organoleptic panel", which stands for an "odour judge", an individual (a nose, if you may) trained for the organoleptic, subjective assessment of halitosis. While I don't necessarily stick my nose in the patient's mouth, the measurement is performed in a way that a person holds the breath for approximately one minute and then slowly exhales the air at a 10 cm distance from the judge's (my) nose. There's a scale from 0 to 5 according to which the halitosis is scored. While reading this may make some stomachs turn, most of us do it daily anyway, unaware of the act itself. Even if you're not trained in scoring the halitosis on a 6-point scale, every day while working with your patients you are indeed doing the most straightforward organoleptic measurement of them all – halitosis present/halitosis absent. And that is just about enough to start thinking about the treatment!

There are also objective ways to measure halitosis through the use of portable devices (i.e. Halimeter, OralChroma) that measure the level of VSCs in the breath. While they're also in daily use, as they cannot capture the "contribution" of other odorous molecules such as diamines to the overall halitosis, they're used as a secondary measurement.

"Is there a mouthwash I could use to make it go away?"

Going back to the beginning of this text, there's a biological explanation of why the advertisements for products promising instant results are false claims. The anaerobic bacteria that produce VSCs inhabit the nooks and crannies of the tongue's surface and periodontal pockets. Moreover, the biofilm that bacteria form is resistant to external stimuli. Thus, using different mouth care products in any form or flavour can only temporarily reduce, or rather mask the halitosis. The effective treatment requires mechanical disruption of the biofilm and subsequent reduction of VSC-producing bacteria, through tongue cleaning and causal (nonsurgical) periodontal therapy. The use of antiseptics such as chlorhexidine, cetylpyridinium chloride and formulations containing zinc can then also be used as an adjunctive.

In aesthetic dentistry, there's an inevitable trend of pointing out the life-changing magnitude of the restoration of someone's smile. Social media is full of videos of unhappy people, unwilling to show their teeth - us, dentists, turn into these self-confident, hair-whipping models showing off their new pearly whites. I have yet to see a video recording of a patient with halitosis, sharing their equally life-changing experience of getting rid of bad breath with a broad audience. I don't expect it any time soon, though. Halitosis is still a social taboo; it's even a taboo among us dental healthcare professionals. And while my patients may not want to discuss their embarrassing (odorous) secret with the world, in front of the camera, I still witness their happiness and gratitude in real life, daily.

And so I continue my pursuit in changing the lives of my patients, one bad breath at a time. 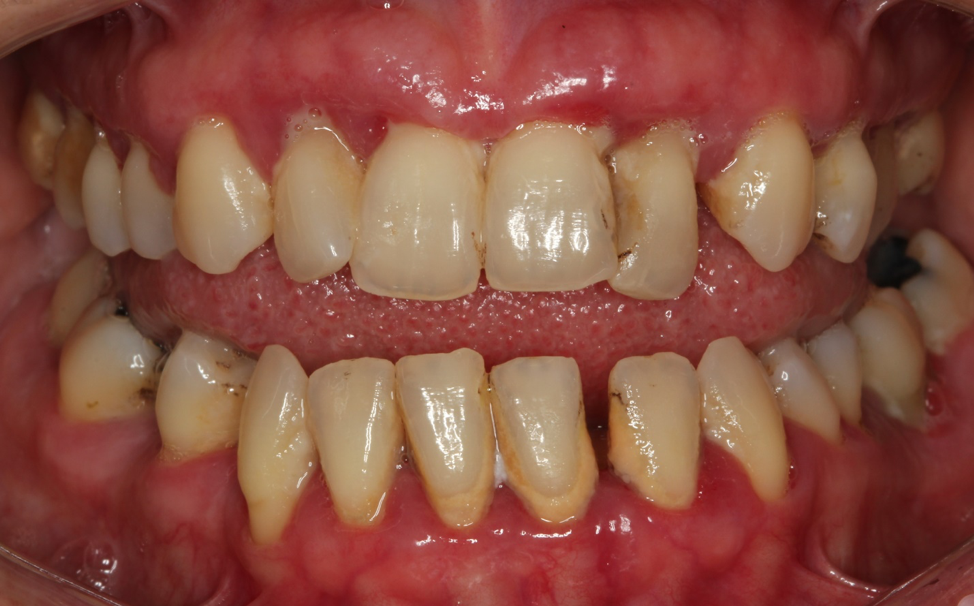 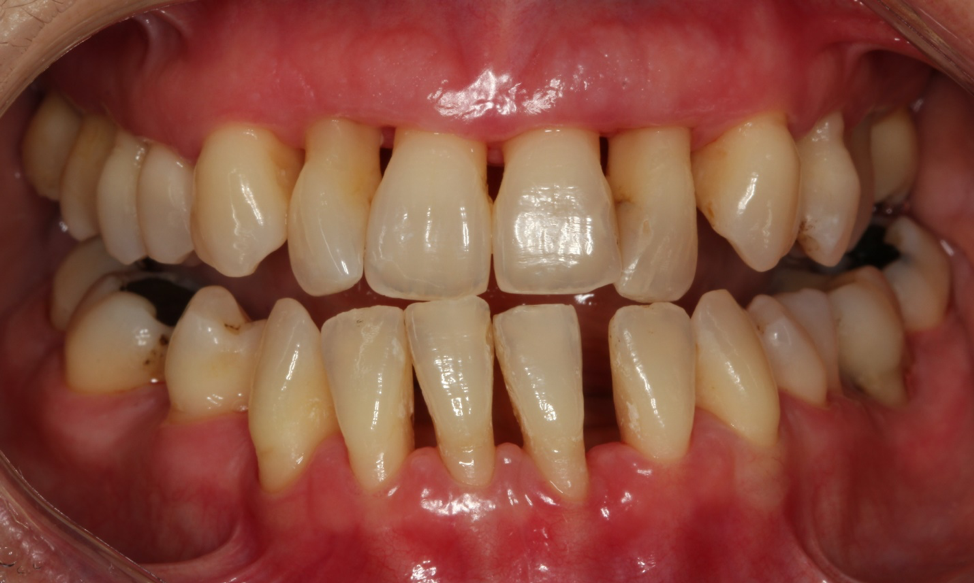 A 50-year-old patient, coming with the complaint of bleeding upon brushing, halitosis and a mobility in her front upper teeth. She was diagnosed with generalized periodontitis, stage III, grade C, halitosis was scored as a 3 on the Rosenberg 0-5 scale (described as “moderate odour” or “malodour that is definitely detected”). She underwent nonsurgical periodontal therapy and was instructed in tongue cleaning. Upon reevaluation, PPD and BOP have significantly reduced, while the malodour was completely absent. 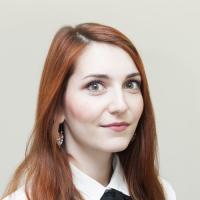 Larisa Music is a teaching and research assistant at the Department of Periodontology, University of Zagreb, Croatia. She’s inspired by physicians-writers, passionate about recording clinical stories and dedicated to education in periodontology.