Not only CAF! Shifting the periodontal phenotype and obtaining root coverage through a split-thickness non-advanced tunnel

When the objective is to modify the periodontal phenotype (as in this case), there is no other technique than split-thickness non-advanced tunnel able to achieve the same results in the short term. A good periodontist needs to know and to control all the evidence-supported techniques and be able to take advantage of each of them, depending on the specific characteristics/objectives of the case.

A 46 years old woman was referred to the Master in Periodontology at Complutense University of Madrid worried about the self-perceived esthetic appearance of her lower teeth, associated with dentinal hypersensitivity and discomfort during brushing. After the clinical evaluation, the following periodontal diagnosis was elaborated:

According to this diagnosis, the patient received non-traumatic oral hygiene instructions, full-mouth scaling and oral hygiene compliance re-evaluation at 2 weeks.

At the re-evaluation, in accordance with the patient’s request, a root coverage procedure was planned in the IV sextant. From 43 to 45, three RT1/RT2 gingival recessions of 2 to 4 mm were present (Figure 1). The gingival margin was thin, and the amount of keratinised tissue (KT) was less than 2 mm on 44-45.

The treatment goals were to:

According to the treatment goals, a split-thickness non-advanced tunnel (Zabalegui et al. 1999) was planned. Indeed, one of the main objectives of the procedure was the short-term modification of the periodontal phenotype. However, while most of the other available techniques (e.g. coronally advanced flap (CAF) or modified coronally advanced tunnel) can achieve a postoperative increase in tissue thickness when associated with the use of a CTG, the increase in KT width is generally obtained only in the long term as a consequence of the re-alignment of the mucogingival junction (Rasperini et al. 2018).

Tunnel procedures have first been described by Allen et al. (1994), in order to treat up to two adjacent gingival recessions. A further development of this technique was proposed to treat several adjacent gingival recessions by Zabalegui et al. (1999). This technique is based on the use of a connective tissue graft (CTG) placed inside a partial-thickness (supraperiosteal) bed, and partially leaving the CTG exposed during healing. The survival of the exposed graft is expected due to the double layer of vascular supply by the internal layer (periosteum) and by the external layer within the tunnel. This surgical approach (supraperiosteal tunnel) has shown clinical efficacy in the root coverage of multiple adjacent gingival recessions, as well as an increase of the width of keratinised tissue (Zabalegui et al. 1999; Tavelli et al. 2018).

Description of the surgical procedure

After local anaesthesia, a split-thickness bed was prepared at the involved teeth on a single plane, far beyond the mucogingival line, using an ophthalmic micro-blade. This bed was started on top of the gingival margin and extended laterally up to reach a plane extended 5 mm in all directions from the mucosal margin of the involved teeth and undermining the facial surface of the interdental papillae, to a position 2 mm coronal to the CEJ (Figure 2). Special attention was paid to avoid disrupting the interdental papillae or perforating the flap. The exposed teeth surfaces were then decontaminated utilising an ultrasonic device.

A free gingival graft (1.5 mm thickness, extending 3 mm in all directions from all the gingival margins of the involved teeth) was then harvested from the palate and de-epithelialised (Figure 3). The donor site was sutured with tooth-suspended cross-mattress horizontal sutures.

The connective tissue graft (CTG) was then placed into the split-thickness bed and sutured. Two sutures were placed, one at the most mesial, and the other at the most distal aspect of the tunnel, positioned in a way to allow the correct corono-apical position of the CTG (its coronal part slightly coronal to the level of the CEJ). The CTG was pushed inside the tunnel through the most central recession (Figure 4).

The insertion was facilitated pushing it with a tunnelling instrument and pulling it by the sutures at the same time, with the help of the dental assistant. No attempts were made to advance the tunnel. Consequently, thanks to the split-thickness bed preparation, a part of the graft was intentionally left exposed (Figures 5-6).

After positioning the CTG, the site was rinsed with saline solution to remove any clot. Mild compression with a sterile gauze with saline was carried out for 10 minutes after completing the surgical procedure.

Postoperatively, the patient was instructed to stop any mechanical self-performed oral hygiene procedure in the surgical area for 2 weeks after the surgery and to rinse for 1 min with 0.12% chlorhexidine + 0.05 CPC 3x/day for 4 weeks. She then started to brush the operated zone with a surgical toothbrush for another 2 weeks, and at 1 month she resumed a conventional a-traumatic mechanical self-performed oral hygiene procedure.

The patient was also instructed to avoid any trauma on the surgical zone (e.g. eating hard food), and not to make any sport activity until suture removal.

At the 8-months follow-up (Figure 7), complete root coverage was present on all the treated teeth; the patient was satisfied with the aesthetic appearance of the treated zone and reported no dentinal hypersensitivity. The desired increase in KT width and soft tissue volume was also observed. With that, all the pre-treatment goals were accomplished.

We are Italians, we all like CAF. And as one of the Italians, I love CAF too. However, a good periodontist needs to know and to control all the evidence-supported techniques and be able to take advantage of each of them, depending on the specific characteristics/objectives of the case. I had the privilege to learn this technique directly from the Master who described it in 1999: Ion Zabalegui. I will always be grateful to this great clinician, dedicated professor and special man.

This technique requires training, as it is a very technically-sensitive procedure. However, at least when the objective is to modify the periodontal phenotype (as in this case), there is no other technique able to achieve the same results in the short term. I encourage you all to use it!

Allen, A. L. (1994). Use of the supraperiosteal envelope in soft tissue grafting for root coverage. I. Rationale and technique. The International Journal of Periodontics & Restorative Dentistry, 14(3), 216–227. https://pubmed.ncbi.nlm.nih.gov/7995692/ 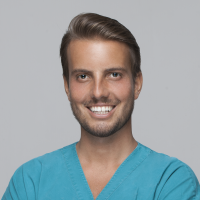